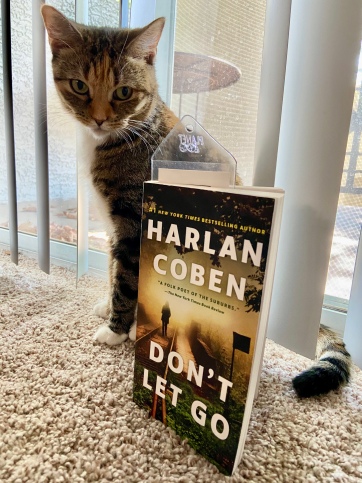 “Suburban New Jersey Detective Napoleon “Nap” Dumas hasn’t been the same since senior year of high school, when his twin brother Leo and Leo’s girlfriend Diana were found dead on the railroad tracks—and Maura, the girl Nap considered the love of his life, broke up with him and disappeared without explanation. For fifteen years, Nap has been searching, both for Maura and for the real reason behind his brother’s death. And now, it looks as though he may finally find what he’s been looking for.

When Maura’s fingerprints turn up in the rental car of a suspected murderer, Nap embarks on a quest for answers that only leads to more questions—about the woman he loved, about the childhood friends he thought he knew, about the abandoned military base near where he grew up, and mostly about Leo and Diana—whose deaths are darker and far more sinister than Nap ever dared imagine.”

This was the first Harlan Coben book I have read and I can definitely see why he is such a popular author. This thriller was fast-paced from the very beginning, and the story was suspenseful and intriguing. What ended up happening involved so many twists and turns, much more than I was expecting. The ending wasn’t hugely surprising, but it was satisfying nonetheless.

I didn’t connect with Napoleon (“Nap”) as much as I hoped I would. Luckily that didn’t matter too much because the story is more focused on the plot and the rapidly developing events.

Some of what happened in this story seemed a little far-fetched to me, mostly the fact that Nap always seems to have the answer or know what’s going to happen. Maybe that was from his years of law enforcement experience, or the years he’s spent wondering what happened to his brother, but things seemed a little too easily lined up at times.

I was bummed about having correctly guessed the ending around the halfway point of the book. I am usually never able to guess “who did it” in a thriller or mystery book. I like being surprised, and again, parts of this story were predictable. When it came down to “who did it and why” my reaction was kind of like, Oh. Not OMG which was what I wanted.

I guess I am a little torn on this one because there was so much I liked, and so much I wasn’t crazy about. I still think it was a great book and I was definitely eager to read it and find out what would happen, but what did end up happening didn’t exactly have me fired up – I wonder if that will make sense to anyone?

On the whole I enjoyed the book and I would consider reading more of his books in the future.