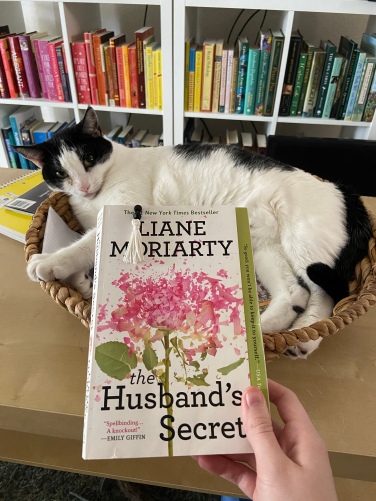 “Imagine that your husband wrote you a letter, to be opened after his death. Imagine, too, that the letter contains his deepest, darkest secret—something with the potential to destroy not just the life you built together, but the lives of others as well. Imagine, then, that you stumble across that letter while your husband is still very much alive. . . .

Cecilia Fitzpatrick has achieved it all—she’s an incredibly successful businesswoman, a pillar of her small community, and a devoted wife and mother. Her life is as orderly and spotless as her home. But that letter is about to change everything, and not just for her: Rachel and Tess barely know Cecilia—or each other—but they too are about to feel the earth-shattering repercussions of her husband’s secret.”

What a wild ride this was!

I am writing this just after finishing the book and I already know I’m going to be processing this one for a while. My first thoughts are that I wish things could have ended differently. If you have also read this book, you might feel the same.

I’ll do my best to review it without spoilers, because there were a few things that I didn’t love that I just want to share why.

As blown away as I was by the ending of this book, I struggled with really getting into the story for the first one hundred or so pages. I even contemplated a DNF because I just wasn’t feeling it.

The only thing that kept me going was that I wanted to find out what was in that letter! Other reviewers stated that it wasn’t what you thought it was going to be, and my interest was piqued by that.

Once I reached that part, the story finally took off for me. I am so glad that I decided to keep reading. It became so suspenseful and I had no idea how it would end or what would happen – I even looked ahead a few times just to satisfy my curiosity, which is something I generally don’t do.

But, I just want to say that the reason the beginning was slow for me was because of all the characters and backstories. It felt like too much information to process right off the bat and it was hard for me to distinguish who was who, which kids belonged to whom, their ages, and so on. This was entirely me, not the book. Call it Covid Brain, Brain Drain, whatever you want, but I really think it was just me being a distracted reader.

For example, when I hear the name Rachel I think of someone in their mid twenties to mid-thirties, not an elderly woman with white hair. And yet the Rachel in this book was elderly with white hair, and I kept forgetting that because that’s such a young sounding name to me. So whenever her name would pop up I would have to think, who is she? Who is she related to again? What’s her deal? Little things like that were confusing me in the beginning. Other readers might not have a hard time distinguishing the characters but since I did at first it was just hard for me to connect with them.

If you’ve enjoyed Liane Moriarity’s books in the past, I think you’ll love this one. It was not short on the jaw-dropping moments or the intense ethical and emotional dilemmas.