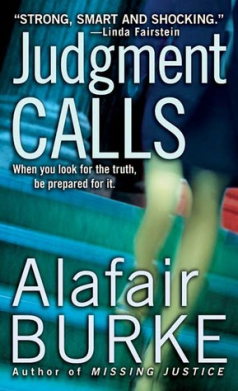 “After three years on the job in Portland’s Drug and Vice Division, Deputy DA Samantha Kincaid gets what she wants: her first case with the Major Crimes Team. Kendra Martin, a 13 year-old runaway, has been found drugged, viciously assaulted, and left for dead in the Columbia River Gorge. Despite pressures to kick the case to assault, Samantha goes for attempted murder. Unfortunately the girl’s story isn’t jelling. Then again, neither is the alibi of the suspect she ID’d, a low-life who insists he’s innocent. One thing is certain, Kendra knows the streets better than Vice – and Samahta’s following her down every last one of them to crack the case.

But the road to the truth is more dangerous than Samantha dreamed, leading to an earlier death-penalty conviction, a teenage prostitution ring, and threats to Samantha’s own life. When the possibility of a serial killer enters the fray, it sends Samantha’s trial into a tailspin, and tests her own judgment – in both her professional and personal life – to the very death.”

-Synopsis from back of the book

A quick heads-up! The synopsis makes it clear that this book will be covering some tough topics, but I wanted to also warn readers that there are some seriously disturbing moments in this book, mostly at the beginning, surrounding the crime and assault that becomes Samantha’s case. So, if you are particularly sensitive to those topics, just be aware of this.

I was so excited to finally get a chance to read this book! I had high expectations and they were more than met, starting with Samantha’s character who is just awesome. She really knows how to hold her own amongst the men in the Drug and Vice Division and in the Major Crimes Team. At the beginning of the book she admits that she never has a zinger comeback ready for the wise-cracking that takes place in the office, which I think makes her very relatable. Still, she can stand up for herself because she’s whip smart and excels at her job. I immediately liked her as a character.

There are two cases that take up the majority of this book. The one mentioned in the synopsis surrounding thirteen year-old Kendra Martin and, later on, a case from several years prior that resurfaces with supposed connections to this new crime. There is significant time spent explaining legal processes and details as they relate to each case. This is something I have always appreciated about Burke’s books because I always end up learning something new, not to mention it adds so much more depth to each story.

I read this book over the course of one weekend (started it on a Friday night and finished up late Sunday afternoon) because the chapters mostly ended on cliffhangers and I really just could not put it down! I was very engrossed in the story especially when it became clear that Samantha was being targeted and her life was at risk.

I wondered why she wasn’t more freaked out about that; she got a new alarm system and seemed to be more aware of her surroundings after the break-in, but wouldn’t you instantly question who in connection to the case might go so far as to threaten her like that? It wasn’t explicitly acknowledged whether or not she was wondering about this, though and it became a kind of afterthought for her throughout the story.

I couldn’t guess much as to how the ending would come together. The “Long Hauler” letters were an indicator to me that someone with inside information was writing them as a ruse, and I did suspect it was someone close to Samantha. I wasn’t all that surprised when that part was revealed, but it turned out to be significantly more involved than I was expecting. It was a thrilling ending to say the least!

I plan to read the rest of the Samantha Kincaid series later this year.

One thought on “Judgment Calls (Samantha Kincaid #1) by Alafair Burke”