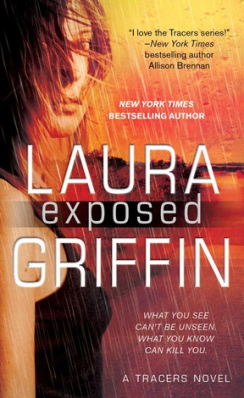 “Every picture tells a story. But not all of them have happy endings. As a forensic photographer at the Delphi Center crime lab, Maddie Callahan is used to seeing violence up close, but she’s never before been the target of it. When a freelance photo shoot goes awry, she realizes she may have seen, and perhaps photographed, the kidnapping of a key witness in a federal probe. And although her camera was stolen, Maddie knows she has something that could be even more valuable to investigators.

FBI agent Brian Beckman has spent months investigating a vicious criminal known as the Doctor, only to have a key witness abducted on his watch. Worse, he’s falling for the woman who may be the Doctor’s next target. Maddie’s aloof facade hides a world of hurt that he wants to heal, no matter how much she keeps him at bay. But first he has to protect her from the danger that’s just out of focus, drawing close enough to shoot . . . and kill.”

Another great addition to the Tracers series! Exposed follows Maddie Callahan, forensic photographer, and Brian Beckman, FBI agent. Since these two haven’t been mentioned in past Tracers books (or if they haven’t I’m totally blanking) it took me a while to get to know them in this book. But, they fit in perfectly with the Tracers crowd so it wasn’t too hard!

I was very intrigued by how Maddie’s profession fit into the Delphi Center crime lab array of professions. As it happens, forensic photographer is not a full time job – Maddie only gets called in when there has been a crime. There was so much detail as to how Maddie does her job, both on the technical side and the emotional side.

“A downside of Maddie’s profession was that with very little imagination – none at all, really – she could conjure up a vivid image of what this pretty young woman had looked like in death. Over the past four years, Maddie had stepped into houses and trailers and apartments and photographed scenes that would reduce grown men to tears – even longtime cops. She had photographed scores of victims, methodically recording their suffering for other to see. It was what she did. It was her job. She was the eyes of the jury.”

Maddie supplements both her income and her free time as a freelance photographer, which is where she is the night that she gets mugged and inadvertently becomes a target in an ongoing kidnapping and murder investigation.

The person Brian and his partner Sam are investigating has been particularly difficult to nail down as he is always covering his tracks. But they know he’s been running what’s known as “pill mills” and smuggling drugs into the country, which means he may be connected to a drug cartel in Mexico.

There are many moving parts to the story but the motivating factor is locating that kidnapping victim, hopefully before it’s too late. Since Maddie herself is now a target, too, she gets pulled into the case whether she wants to be or not. Brian feels like he has to help protect her, but of course their attraction to one another keeps getting in the way of him being able to keep her safe.

Aside from that, we get to learn a lot about forensic photography in this book which as you can tell I was just fascinated by. That’s always been my favorite thing about the Tracers books. They are so incredibly well-researched and you get to learn so much! I’m pretty sure I’ve Googled the Delphi Center on more than one occasion, always forgetting that it isn’t actually a real place 😉

One thought on “Book Review: Exposed”