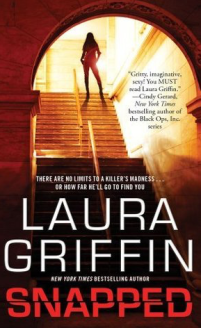 “On a sweltering summer afternoon, Sophie Barrett walks into a nightmare. A sniper has opened fire on a college campus. When the carnage is over, three people – plus the shooter – are dead and dozens more are injured. Sophie escapes virtually unscathed. Yet as details emerge from the investigation, she becomes convinced that this wasn’t the random, senseless act it appeared to be. No one wants to believe her – not the cops, not her colleagues at the Delphi Center crime lab, and definitely not Jonah Macon, the homicide detective who’s already saved her life once.

Jonah has all kinds of reasons for hoping Sophie is mistaken. Involving himself with a key witness could derail an already messy investigation, not to mention jeopardize his career. But Sophie is as determined and fearless as she is sexy. If he can’t resist her, he can at least swear to protect her. Because if Sophie is right, she’s made herself the target of a killer without a conscience. And the real terror is only just beginning….”

I’ve said it before and I’ll say it again: the Tracers book just keep getting better! Sophie Barrett and Jonah Macon made a cameo in the last Tracers book, Unforgivable. I liked what I saw of both of their characters so I was definitely looking forward to this book. However, I had no idea just how much of a hot mess they were both going to be! While all these characters carry baggage of some sort, it seemed like both Sophie and Jonah were drowning in it, or maybe it was just the first time I was noticing it.

Plot-wise, this one deals with something a little closer to home than the usual crimes the tracers are investigating. A school shooting. Ugh. I didn’t enjoy reading about that although it was a compelling start to the book, to say the least. Once Sophie declares there was more than one person involved, although it takes a while for the San Marcos police to believe her, they start investigating it as a conspiracy.

Meanwhile, the unnamed character stalking Sophie keeps trying to silence her and there are several attempts on her life. Jonah wants to protect her but he can’t get too involved because she is a witness. Not only that, but Sophie doesn’t want anyone else making the decisions of her safety; she’s dealing with her own trauma of being kidnapped and almost killed (in the previous book) and she can’t stand being told what to do.

All of this made for quite the wild ride. I will say that even though Sophie feels attracted to Jonah for inexplainable reasons, I didn’t see as much of a connection between them as I wanted to. They both seemed to just be driving each other crazy and stepping on each others toes. Don’t get me wrong, it made for a great story but I just couldn’t quite see their connection like I have with past Tracers books. Still, the ending was perfect and I hope they make a cameo in future books.

I really enjoyed this book, and I know I will continue to thoroughly enjoy this series. Although it’s not technically a series, as the books can be read out of order, I am still following the publication order of each book. Next up will be Twisted!

One thought on “Snapped (Tracers #4) by Laura Griffin”