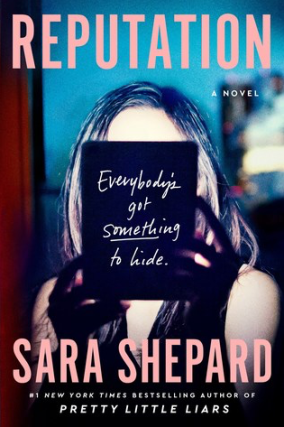 “Aldrich University is rocked to its core when a hacker dumps 40,000 people’s e-mails—the entire faculty, staff, students, alums—onto an easily searchable database. Rumors and affairs immediately leak, but things turn explosive when Kit Manning’s handsome husband, Dr. Greg Strasser, is found murdered. Kit’s sister, Willa, returns for the funeral, setting foot in a hometown she fled fifteen years ago, after a night she wishes she could forget. As an investigative reporter, Willa knows something isn’t right about the night Greg was killed, and she’s determined to find the truth. What she doesn’t expect is that everyone has something to hide. And with a killer on the loose, Willa and Kit must figure out who killed Greg before someone else is murdered.”

The cover of this book is what first caught my eye. I haven’t read many books by Sara Shepard beyond the first couple books in the Pretty Little Liars series, and the synopsis of Reputation sounded so intriguing that I decided to give it a go.

Even with having only read a small sample of her work, I think I can honestly tell you that this book is peak Sara Shepard: the rotating perspectives, the multiplying lies, the high stakes, the murder – it’s all there. So, if you are a fan of her books or a fan of the Pretty Little Liars series (books or TV show), I think it’s safe to say you will definitely enjoy this book.

Now on to the review (with light spoilers ahead)…

There were a couple moments when reading this book that I thought, Oh, this is getting good. And other moments where I thought, Eh, how many pages until the next chapter? I loved the story line of Kit and Lynn working together and Lynn being a classic mean girl. I don’t feel that Laura was brought into the story enough so I didn’t really feel one way or the other about her chapters.

My biggest issue was with Raina. I did not like her character as much as the others, and it was her chapters that always had me looking ahead, wondering whose story would be next. It just felt like she was a very obvious red herring. I think all of Raina’s chapters could have been taken out, and the story would have had a greater impact. The reason I’m saying that is because we had a much more compelling story line in Willa, whose history in relation to Aldrich includes a rape at a frat house party which (at the end) ties into the story. For me Willa brought so much more to the story than Raina and her plot line was more compelling and meaningful. I don’t want to think that Raina was only included for the sake of having an LGBT story line, but that thought did cross my mind while I was reading. At the end, it just felt like she was there and that was it.

I ended up correctly guessing who the killer was, because the ending was very, very similar to another book I read a few months ago. That was kind of odd, and made for an unsurprising end, but it was satisfying nonetheless.

One thought on “Reputation by Sara Shepard”