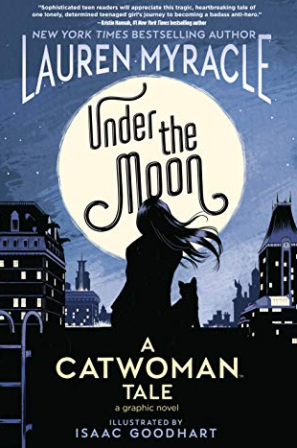 “Selina Kyle is fiercer than she knows. For 15 years, she’s put up with her mother’s string of bad boyfriends, but when Dernell, her mom’s current beau, proves crueler than the others, Selina reevaluates her place in her home. There’s no way Selina and Dernell can live under the same roof, and since Dernell won’t leave, Selina must.”

Wow, there was a whole lot more going on in this graphic novel than I ever would have expected! First of all, I am so in love with this cover. Thankfully it wasn’t false advertising, because the illustrations inside were just as stunning.

Overall it was a great story, but I will admit it had nothing to do with the original Catwoman and this is not an origin story by any means. Selina Kyle is a teenage girl who has had a rough life and eventually decides that being on her own, rather than living at home with her mom and her mom’s boyfriend, is the best option for herself. I wouldn’t say she chooses to be homeless so much as she is pushed to that point, but I definitely thought it was the better and safer option for her.

As we follow her daily life, there is a cameo appearance by Bruce Wayne, her friend from school, that sort-of-not-really turns into something later on in the story. I am not very familiar with Catwoman, or the Batman origin for that matter, so I can’t say if their friendship was significant only that it did work for this particular story. The plot was a little predictable but not in a way that made me not enjoy the story. I really loved how the spirit of Selina’s cat, Cinders, came to her and told her she was catgirl, and yet I was disappointed by the fact that nothing really came of that; it was an aspect to the story that I was expecting more of but it kind of fell flat.

If this was a series, I would definitely continue reading it to follow Selina’s story. I will also admit that I was maybe expecting there to be more cats involved in this story than there actually were, ahem, although there definitely were cats 🙂

Trigger warnings for this book include: suicide, domestic violence, self-harm, and animal cruelty. I certainly wasn’t expecting any of this going into the story, so I wanted to warn potential readers just in case.

One thought on “Under the Moon: A Catwoman Tale by Lauren Myracle”