“Elaina McCord’s dream of being an FBI profiler is threatened by her very first case – investigating a string of murders near a Texas beach resort. The victims, all young women, were drugged and brutally murdered, their bodies abandoned in desolate marshland. Elaina’s hunch – met with disbelief by local police – is that these are only the latest offerings from a serial killer who has been perfecting his art for years, growing bolder and more cunning with each strike.

True-crime writer Troy Stockton has a reputation as an irresistible playboy who gets his story at any cost. He’s the last person Elaina should trust, let alone be attracted to. But right now Troy, along with the elite team of forensics experts known as the Tracers, is her only ally in a case that’s turning dangerously personal. A killer is reaching out to Elaina, taunting her, letting her know how ruthless he is and how close he’s getting. Now it’s not just her career that’s in jeopardy – it’s her life….” 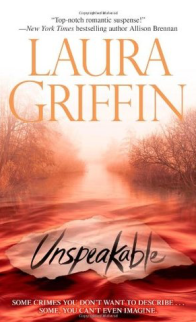 Unspeakable was really, really good! I loved it. I ended up tearing through it last weekend; the characters, the crime being investigated, and all the nuances that came with it were right up my alley.

Elaina McCord and Troy Stockton are such likable characters but in completely different ways. They both have a lot on the line with this case both professionally and personally. Elaina is kind of an underdog and the way she is treated by the senior law enforcement on the task force (all men) was very relatable. I wanted to see her prove them all wrong, not to gain their respect but just to put them in their place. Meanwhile, Troy’s entire book about the previous murders could be wrong if they turn out to be connected to the recent ones, so he wants to solve the case just as much as Elaina.

I could have never predicted where the story would end up with the crime being connected to geocaching and the depths of the internet. It added a new layer to the story, and it gave reason to bring the case to the Delphi Center (where cyber crimes are investigation, among other things) which will clearly play a role in all the Tracers books.

Laura Griffin’s books are very technology driven, which makes them feel very current and realistic. I didn’t guess who the killer was (as usual) but I do think the hints were there, but the reader is purposely led in a few different directions. I honestly thought it was Ric for a while there and I’m so glad it turned out not to be.

I still can’t decide how I feel about Elaina not taking the job at Quantico. On one hand, she should have taken this amazing opportunity that was everything she’d dreamed of. On the other hand, how could the series continue if she didn’t decide to stay in Texas?? Hah. Ultimately it fit with the story so I’ll let it slide without too much more analyzing.

The Tracers series is unique in that it does not have to be read in order. While the characters overlap, the individual stories do not. However, Goodreads has listed them in “order” so I’m most likely going to follow along with that. Next up will be the novella Unstoppable, followed by book three, Twisted.