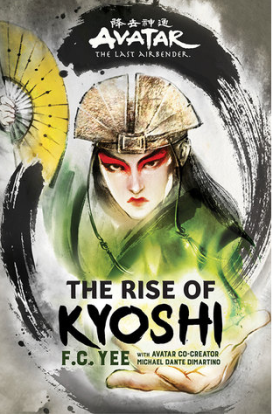 “”F. C. Yee’s The Rise of Kyoshi delves into the story of Kyoshi, the Earth Kingdom–born Avatar. The longest-living Avatar in this beloved world’s history, Kyoshi established the brave and respected Kyoshi Warriors, but also founded the secretive Dai Li, which led to the corruption, decline, and fall of her own nation. The first of two novels based on Kyoshi, The Rise of Kyoshi maps her journey from a girl of humble origins to the merciless pursuer of justice who is still feared and admired centuries after she became the Avatar.”

I was pleasantly surprised by this book! It was a great read and fans of the Avatar: The Last Airbender series will not be disappointed. It’s technically a prequel, so you don’t have to have read the past graphic novels or seen the show to keep up with and enjoy the book)

I am a huge fan of the Avatar series. I watched the show from the very beginning, and loved Legend of Korra, too. I was super intrigued by the concept of this book exploring Avatar Kyoshi’s life, but I was hesitant about the format.

When it comes to this series, all that exists beyond the shows are graphic novels, which I have slowly been making my way through this year. There has never before been a full-blown novel. Not to mention, one this long – over 400 pages! But just like with the graphic novels, and the entire series itself, I was drawn into the story right away with the descriptive storytelling, complicated characters and intense emotion and drama.

In Rise of Kyoshi, young Kyoshi is a servant girl living on the compound where the newest Avatar, Avatar Yun of the Earth Kingdom is being trained. A turn of events reveals that Kyoshi is in fact the Avatar, not Yun. That the sages of the Earth Kingdom could have been mistaken when selecting the new Avatar is too scandalous to even consider, so one of the sages in particular, Jianzhu, believe they need to keep this a secret as long as possible, despite fellow sages disagreeing. Jianzhu commits an act of betrayal and before Kyoshi can even think about training as an Avatar, she finds herself on the run and seeking revenge. With a ragtag team alongside her, including her best friend Rangi, she hopes to train enough, in secret, to ultimately face and defeat her worst enemy.

As I said, I thoroughly enjoyed this book! It ended on a wild cliffhanger, so I am excited to see where the story picks up and ultimately ends with the next book.