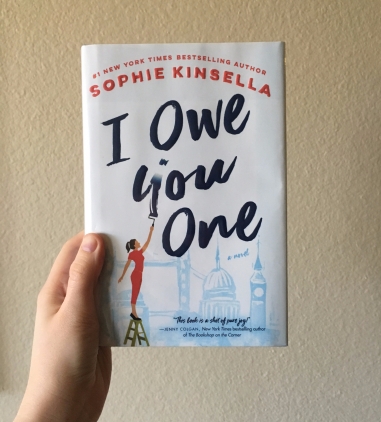 “Fixie Farr has always lived by her father’s motto: “Family first.” But since her dad passed away, leaving his charming housewares store in the hands of his wife and children, Fixie spends all her time picking up the slack from her siblings instead of striking out on her own. The way Fixie sees it, if she doesn’t take care of her father’s legacy, who will? It’s simply not in her nature to say no to people.

So when a handsome stranger in a coffee shop asks her to watch his laptop for a moment, Fixie not only agrees—she ends up saving it from certain disaster. Turns out the computer’s owner is an investment manager. To thank Fixie for her quick thinking, Sebastian scribbles an IOU on a coffee sleeve and attaches his business card. But Fixie laughs it off—she’d never actually claim an IOU from a stranger. Would she?

Then Fixie’s childhood crush, Ryan, comes back into her life and his lack of a profession pushes all of Fixie’s buttons. She wants nothing for herself—but she’d love Seb to give Ryan a job. And Seb agrees, until the tables are turned once more and a new series of IOUs between Seb and Fixie—from small favors to life-changing moments—ensues. Soon Fixie, Ms. Fixit for everyone else, is torn between her family and the life she really wants. Does she have the courage to take a stand? Will she finally grab the life, and love, she really wants?”

Sophie Kinsella is one of the authors I will always read. I have loved her books for years because they are light and fun, and also smart and moving. She is one of few authors I know I can turn to when I am in a reading rut or just need a pick-me-up story.

I Owe You One came out earlier this year and I finally had a chance to read it. Overall, it was a great story and had all the classic elements that Sophie Kinsella is known for: outrageous I Love Lucy style shenanigans, fully developed secondary characters, extensive plots, lots of tense moments, and often unpredictable endings.

While I really enjoyed this story, Fixie is probably not going to be one of my favorite Sophie Kinsella characters. She is incredibly passive and gullible. Her family takes advantage of her in ways that made me groan in frustration. It can be hard to root for a character who simply goes along with whatever anyone tells her and takes everything at face value. But Fixie has good intentions and plans for her family’s store so that helps. It’s simply a matter of her gaining the confidence to voice those ideas, which happen to all be contradictory to her siblings’.

I knew from the beginning of the story that the family first motto was going to cause a lot of trouble. There are no two worse words in the English language! They always lead to someone being taken advantage of, in this case, Fixie, for pretty much her entire life. Not only did that motto create endless problems, but pretty much every character’s lack of communication with one another also contributed to much confusion.

The book itself was quite long but I read it quickly because there was so much going on that I had to know what would happen next. Just when it seemed like everything was falling to pieces for Fixie, things came back together and led to a satisfying ending for everyone.

One thought on “I Owe You One by Sophie Kinsella”