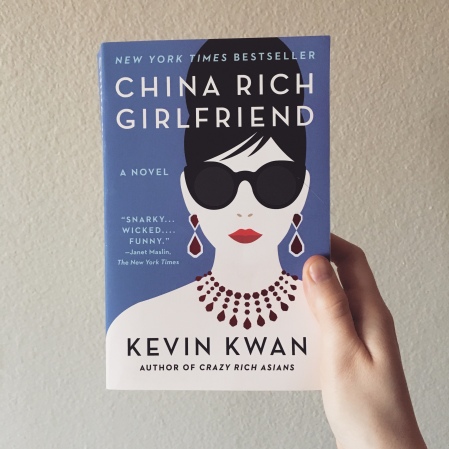 “On the eve of her wedding to Nicholas Young, heir to one of the greatest fortunes in Asia, Rachel should be over the moon. She has a flawless Asscher-cut diamond from JAR, a wedding dress she loves more than anything found in the salons of Paris, and a fiance willing to sacrifice his entire inheritance in order to marry her. But Rachel still mourns the fact that her birthfather, a man she never knew, won’t be able to walk her down the aisle. Until: a shocking revelation draws Rachel into a world of Shanghai splendor beyond anything she has ever imagined. Here we meet Carlton, a Ferrari-crashing bad boy known for Prince Harry-like antics; Colette, a celebrity girlfriend chased by fevered paparazzi; and the man Rachel has spent her entire life waiting to meet: her father. Meanwhile, Singapore’s It Girl, Astrid Leong, is shocked to discover that there is a downside to having a newly minted tech billionaire husband. A romp through Asia’s most exclusive clubs, auction houses, and estates, China Rich Girlfriend brings us into the elite circles of Mainland China, introducing a captivating cast of characters, and offering an inside glimpse at what it’s like to be gloriously, crazily, China-rich.”

I adored this book. I read Crazy Rich Asians last year and fell in love with Kevin Kwan’s writing and storytelling style. The descriptive writing, not just about life in Singapore, (and Hong Kong and Paris and California) but also the character details (the extravagant clothing, unique mannerisms) is so immersive. Each time I sat down to read China Rich Girlfriend, I ended up reading more than I planned because I just couldn’t stop.

One of the things I love most about these books are that they are full of the kinds of characters you love to hate. Eleanor Young is decidedly the worst, and yet I am always compelled to see how her elaborate schemes play out every time. Kitty Pong is a social climber that I just can’t help but root for. And along the way we meet Carlton Bao and his mother, Shaoyen Bao who are also kind of terrible, too. (I was also super annoyed with Rachel’s dad’s behavior, and I have to say he wasn’t a character I had developed a fondness for even at the end of the book).

And yet, each of these characters along with everyone else Nick and Rachel come in contact with are so multilayered. On the outside they may seem like spoiled billionaires with no sense of reality, but their decisions and actions are not as thoughtless as they appear to be on the surface. China Rich Girlfriend was filled with the same jaw-dropping antics as before, with lots of twists and turns along the way. Poor Nick and Rachel seem to be in over their heads, yet again, and the reader is pulled along with them on the wild ride.