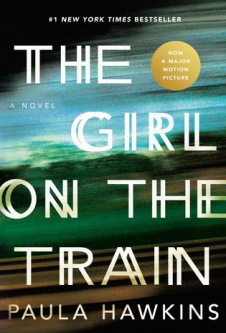 I finally got around to reading The Girl on the Train by Paula Hawkins. I watched the movie adaptation almost immediately afterward, so below are reviews of both.

This thriller was not as fast-paced as I was expecting it to be. In fact, it started out quite slow for me and didn’t really pick up the pace until almost one hundred pages in. That’s not to say it wasn’t an intriguing story until that point, but there was a lot of laying the groundwork that needed to happen first. What made this book difficult for me to read initially was how depressing Rachel’s life was.

She is stuck in an alternate reality of sorts where she watches her ex-husband and his new wife live out the life she believed she would have, in the house that used to be hers. The constant ruminating on what she lost, and her incessant drinking, was a lot to take in. While I disliked most of the characters for being awful people, I have to say I disliked Anna the most because of her behavior towards Rachel. Women treating other women like crap really irks me, even if Anna and Rachel came to an understanding of sorts at the very end.

The very end of the book (about the last fifty or so pages) was the most exciting to read. Up until then it was a slow crescendo to the breaking point and then everything exploded. I wasn’t crazy about the ending, particularly Tom revealing his evil plan in that very drawn-out scene; I don’t want to give him the credit for being the evil genius that that scene made him out to be.

The gaslighting in this book was so many levels of unreal, and despite Rachel’s seemingly weak character, I felt sympathetic towards her for the entirety of the story. I was also incredibly sympathetic towards Megan who just couldn’t catch a break in her entire life no matter what. Her storyline in particular felt so realistic and was equally as depressing to read about. In short, I think this book was more depressing than it was thrilling. I didn’t dislike it in any way, and would in fact recommend it to anyone looking for something dark and mysterious to read.

As far as book-versus-movie comparisons, I have to say the film adaptation was an exceptional compliment to the book. I pictured the characters differently, and the setting of course had been moved from England to New York, not to mention Rachel was suddenly an artist in the movie, but those were pretty much the only differences that stood out to me. Everything else was almost exactly like the book.

What the movie captures, and what I think the book really is about, is the dark mood that lingers throughout the story. The reader, and the viewer, are both left to wonder alongside Rachel what she did that night and just what exactly happened, until the last moment when everything comes into focus and she finally remembers.

Since I am writing this post less than a day after finishing the book and watching the movie, it’s safe to say I am still very much processing all of it but on the whole, I was pleased with both the book and the movie.

What did you think of The Girl on the Train? Book or movie, I’d love to hear your thoughts!

5 thoughts on “The Girl On the Train: Book + Movie Review”