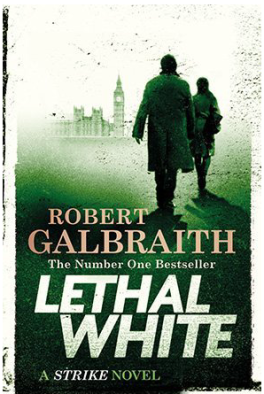 the first half of this post contains a modest review. The second half contains many spoilers. If you plan on reading Lethal White or the Strike series, avoid this post.

It wasn’t that long ago that I was counting down the days until the release of Lethal White by Robert Galbraith. After reading Career of Evil last summer, it has been an arduous wait to find out what happens next in both Robin’s and Strike’s stories, respectively.

Well, Lethal White picks up exactly where Career of Evil left off. Literally, the very next scene. It was a most satisfying wrap up to that intense moment at the end of Career of Evil when we believed Robin was making the biggest mistake of her life.

The crime Strike and Robin investigate this time around was one of the most complicated ones yet. The first person to approach them claims he’s seen a murder, but he is a mentally unstable young person whose family are quick to say that he doesn’t know what he’s talking about. Still, Strike is intrigued and determined to take him seriously until he can prove otherwise.

The mystery they get tangled up in leads them to anti-government protests set against the 2012 London Olympics. Robin once again adopts a new identity or two, and spends time working undercover. Those had to be some of my favorite chapters by far. The suspense was unbelievable and once again, I am impressed by her quick-thinking and bravery, not to mention her ability to pick up and drop accents at a moment’s notice.

A satisfying ending, with a most intense lead-up, concluded this over-six-hundred-page book. Right after I finished I thought: when should I go back and re-read the whole series?

There were too many jaw-dropping moments for me in this book, that I’ve compiled a list of some of my favorite ones below:

And with that, finishing this book brought me to completion of my Goodreads reading goal for this year: 50 books total so far, and counting!