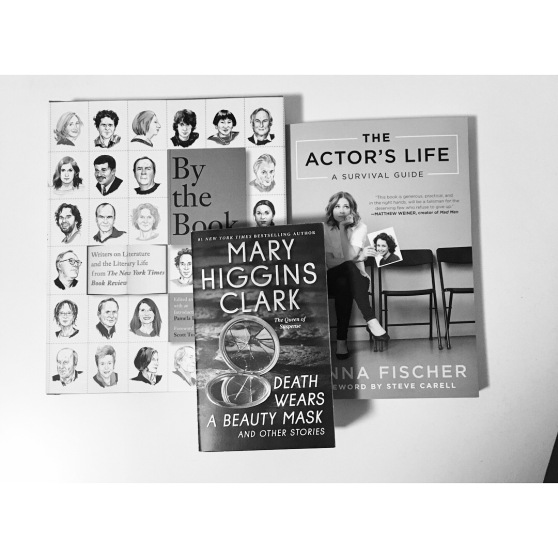 Last weekend was the 10th annual Tucson Festival of Books at University of Arizona in Tucson. Being that I am a Wildcat and all, I felt compelled to attend the festival not just to show some school spirit, but because it sounded so fun!

We arrived in Tucson on Saturday morning and spent some time moseying around campus. The quad was filled with rows and rows of booths and tents; so many that it was impossible to decide where to start first. It was overcast and a little warm but overall good weather for an outdoor event. 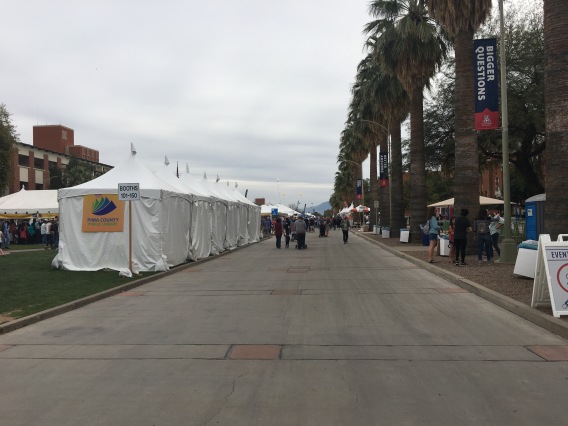 One booth in particular was selling used classic books that had been converted into spiral notebooks. They were so pretty and I definitely had my eye on a special edition of Anne of Green Gables that had been made into a pretty good sized notebook, but decided against buying it. My handwriting is so messy that I would never want to ruin something so pretty like that!

“The Actor’s Life: A Survival Guide”

Around midmorning we decided to go take a peek at where Jenna Fischer would be speaking later in the day. She had tweeted out the night before that the room had been changed, and I wanted to know the new location asap. We found the building within a half hour. A small group had gathered near a table where copies of Jenna’s books would be for sale, and people were already filing into the auditorium. Rather than walk around for an hour and a half to kill time before the session began, we decided to go in early to get good seats and wait it out. We ended up sitting in the front row on the right side of the stage, and because we were in the front row I didn’t see how many people were there until the room was full, and let me tell you it. Was. Packed.

Volunteers for the festival and security guards were running back and forth between the stage and a door right next to us, and we knew that was where Jenna would be making her entrance. Sure enough at one on the dot, she came out and it was so surreal to see her in person! She was wearing a really cute outfit (which you can’t see in the pictures) and looked genuinely happy to be there.

So, Jenna hops up on stage and takes a selfie with the crowd (which is on her Instagram but which we were left out of because we were on the other side of the room!) and sits down and the moderator begins asking questions about her book.

The conversation went well, and Jenna shared about half a dozen personal stories from the book about her life pre- and post-moving to L.A., getting her “break” with The Office and what life has been like since then.

You didn’t have to be an actor or an aspiring actor to identify with her story. She spoke about the fact that life as an artist is not always what you expect it to be, or when. One standout comment she made was that you can’t ever control the opportunities that come to you, but that you can control your readiness. Her example, for actors, was that you shouldn’t start practicing your Scottish accent when you get an audition and will need to learn one in 24 hours; you should be practicing it all the times you don’t have an audition so that when you do, you will be ready.

This really stood out to me because it is so true; artists need to be honing their craft every single day in order to see results. This applies to writers, musicians, painters, and all others whose works lie in the creative field. She emphasized that it was her years working as an administrative assistant during the day while pursing her acting career on the side that ultimately prepared her for the role of Pam on “The Office.”

In addition to knocking around the festival, we walked through the Arizona State Museum which is located on campus. Although the exhibits weren’t anything I haven’t already seen and learned about (growing up in Arizona, after all) the exhibits were still amazing to see, and I’d highly recommend stopping in if you are ever in the area.

Our last stop before leaving for the day was the UA bookstore. I found some good books (in the top photo) and as we left the bookstore I looked up and saw R.L. Stine standing right in front of me. I nudged Anthony.

Anywho, I am eager to start The Actor’s Life to learn more about Jenna’s journey and advice she has for others. There were so many authors presenting at the festival and unfortunately I didn’t get to see as many as I had hoped. But, Jenna’s session really blew me away and it made the trip so worth it. We had a wonderful time, even though the weather threw us a massive March curve ball: sunny and warm midday, windy and raining and cold by the afternoon.

All smiles when I’m at U of A, I’m surrounded by books 🙂

3 thoughts on “Seeing Jenna Fischer at Tucson Festival of Books”