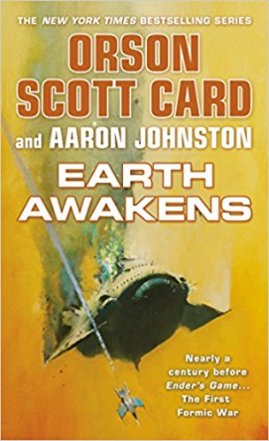 Earth Awakens by Orson Scott Card and Aaron Johnston is the conclusion of the First Formic War trilogy, and it went out with a bang. Picking up right where Earth Unaware left off, Earth Awakens opens with our pal Mazer Rackham, along with Wit O’Toole, and the Mobile Operations Police (MOPs) trying to devise new tactics for defeating the formics that have invaded China.

Victor and Imala, with the help of Lem Jukes, go on what appears to be a suicide mission to the formic ship. Victor manages to get inside the ship and records the entire time. In a breathtaking chapter, he gathers enough intel to (hopefully) find a way to destroy the formics once and for all. Bingwen continues to pop up in dangerous places, linking his and Mazer’s fate even more than before. Bingwen turns out to be vital to the recovery work beginning in China, and his talents are noticed both by the MOPs and the Chinese military.

Some of the highlights for me included Victor’s storyline with Imala and with reconnecting with his mom, Rena. He succeeded with his mission of warning Luna and Earth about the formics, and was able to continue with Imala and Lem, whom they learn to trust. Victor had had a particularly frustrating storyline throughout the trilogy and it was nice to see him come full circle. Additionally, the reformation of Lem Jukes was a refreshing surprise. I don’t think I’m the only one who thought he was a lost cause from the moment he bumped El Cavador, but his character evolved significantly.

I’m going to be honest here though, and say that I hate the way Orson Scott Card characterizes children in his books. I’m putting this solely on him and not Aaron Johnston, because the children in Ender’s Game were portrayed in a similar way. They are seen as either geniuses who are smarter than all the adults and children (like Ender and Bingwen) or unbelievably nasty bullies (Peter, Pipo, other children from Bingwen’s school). The latter speak and behave in ways I have never seen children do in my life. At first I just thought it was a quirk of Peter’s to be a manipulative and evil little shit, but continuing with that archetype tells me Card must think most children are like this. The “I’m a genius, misunderstood both by children my age and adults who won’t listen to me” began to wear on me. I think it worked for Ender, but it was pushed too much with Bingwen.

Sadly, and (very) unfortunately, I think this is going to be it for me with the pre- and post-Ender’s Game series and spinoffs. I was initially quite eager to finish this trilogy, and while Earth Awakens left me with a satisfied ending, something just fell flat.

The feeling crept over me during one of the last chapters, when Bingwen and Lieutenant Li were on the train heading north to Bingwen’s new school. The train was stopped by a group of bandits, and Bingwen successfully de-escalated the hostage situation, creating a compromise for both the soldiers on the train and the villagers. Yet, Lieutenant Li took advantage of the situation and murdered the four villagers who boarded the train under the impression that they would be given half their food store in exchange for allowing the soldiers to pass. It was such a blow, and one that I wasn’t expecting to see in this book because things were wrapping up and coming together in what I thought was going to be, more or less, a good ending. It created a sense of this is never going to end, is it? in my mind and that’s not really an ideal mindset for a reader to be in.

A bummer? Yes. Very much so. But there are so many other sci/fy books I’d like to get my hands on before I get sucked into another formic war trilogy.

What are your sci/fy recommendations? I particularly love short stories a la Ray Bradbury, so I’m hoping to get back into those and have more SFF posts coming soon.