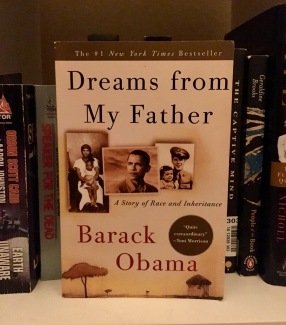 Prior to reading this book the extent of my knowledge of the President’s personal life was admittedly not great. I know that his mom was from Kansas, his dad from Kenya, and that he was born and raised in Hawaii, that he went to Harvard…and that was pretty much it. Oh, and that he is our first black president of course. To be fair I wasn’t even voting age when he was elected so I’m blaming my ignorance on that.

At any rate, Dreams of My Father came about when Barack Obama was elected as the first African American president of the Harvard Law Review, long before he was even running for president of the United States. It was the first book he ever wrote and he was plagued by the fear that nothing would come of it, and that he had nothing worthwhile to say, or at least not anything anyone would want to read anyway. Wrong.

I was so consumed by this book, and pleasantly surprised by how well written it is, although I shouldn’t have been since he is already such an eloquent speaker. I have always admired his measured and thoughtful demeanor when speaking and it definitely carries over into his writing and storytelling.

My copy of the book included a ten year anniversary note in which he reflects on all that changed since the book was first published in 2004, and he also revealed something interesting:

“Most of the characters in this book remain a part of my life, albeit in varying degrees – a function of work, children, geography, and turns of fate. The exception is my mother, whom we lost, with a brutal swiftness, to cancer a few months after this book was published…during the writing of this book, she would read the drafts, correcting stories that I had misunderstood, careful not to comment on my characterizations of her but quick to explain or defend the less than flattering aspects of my father’s character…I think sometimes that had I known she would not survive her illness, I might have written a different book – less a meditation on the absent parent, more a celebration of the one who was the single constant in my life…I know that she was the kindest, most generous spirit I have ever known, and that what is best in me I owe to her.”

What follows this emotional introduction is a reflection of his mother’s early life, and her family’s lives, and what it was like for him growing up in Hawaii where his mother and grandparents would tell him stories about his father that made him seem larger-than-life, someone he desperately wanted to know. But when he finally did meet him at age ten, his expectations were not met; his father was a stranger to him by that point and he simply didn’t know what to make of him. That trip lasted only a few weeks before his dad left and went back to Kenya. Soon his mom was remarried and she and Barack went to live in Indonesia for three years with his new stepdad, an Indonesian man Barack called Lolo.

His mother sent him back to Hawaii to finish school, but it was then in his early teens that he first started to question his identity. He lacked a sense of place and a sense of community. Being a black man raised by a white family gave him a skewed perspective of the world that he struggled to make sense of. This in part is what led him to Chicago after college, to work in community organizing. Although he jokes that if you had asked him then what community organizing was, he wouldn’t have been able to tell you. He was mostly searching for a place to belong where he could do meaningful work, with like-minded people, for the greater good of black Americans.

It was around this time that he met one of his half-sisters on his father’s side, Auma, who came to visit him in Chicago by way of Germany where she was in school. She filled him in on all that had happened with his father since the last time he saw him when he was ten years old: he’d had several more children with different wives, gone from holding a prestigious government position in Kenya to being unemployed and homeless after speaking out against a superior, and he had been blacklisted until the president of Kenya died at which point he was allowed to work for the government again. But this time he was in a much lower position, and Auma says he began to fade. At the time of his death he was sad and lost, she says. Both she and Barack revealed that they regretted that their father died before either of them had gotten to know him, and that there was really nothing either of them could have done to change that. Auma answered as many of his questions as she could, but he still came away feeling like he knew even less about his father than he thought he did.

“Where once I’d felt the need to live up to his expectations I now felt as if I had to make up for all his mistakes.”

After working as a community organizer in Chicago for several years he applied to Harvard Law, and then took it upon himself to visit Kenya for the first time in his life. When he arrived at the airport he was surprised that people recognized his last name, and upon hearing it would recall fondly his father, known to everyone as Dr. Obama. For the first time he felt the sense of belonging he’d been craving his whole life. He was introduced to dozens of the family members and siblings he’d heard about for so many years and he felt a connection to them through the Old Man, which they all called their father. When he finally visited his father’s grave he wept but felt a sense of calm:

“I felt the circle finally close. I realized that who I was, what I cared about, was no longer just a matter of intellect or obligation, no longer a construct of words. I saw that my life in America – the black life, the white life, the sense of abandonment I’d felt as a boy, the frustration and hope I’d witnessed in Chicago – all of it was connected with these small plot of earth an ocean away, connected by more than the accident of a name or the color of my skin. The pain I felt was my father’s pain. My questions were my brother’s questions, their struggle, my birthright.”

If you are at all interested in Barack Obama or reading memoirs you will enjoy this book. I definitely feel like I am mourning the Obama’s now and am so sad to see them leaving the White House, and I wish I could have been at that final White House party which sounded like the greatest party ever 🙂  If there is any one section of this book I’d recommend it is the chapters on Chicago because you can really see how the challenges he faced there developed his character and his patience and how to connect with people, the man before the man became president.