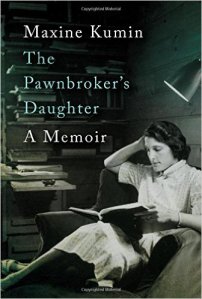 The Pawnbroker’s Daughter is the story of Maxine Kumin (Pulitzer-prize winning poet, writer and  feminist) her early life in the 1930s and 40s in Philadelphia, and how she channeled her resentment of life as a house-wife into her writing and poetry. I will admit that I had not read a whole lot of Kumin’s work prior to reading her memoir. Her life is fascinating to read about nonetheless, even if you are not a regular reader of her poetry.

She grew up in Philadelphia in the 1930s during which time her family struggled to fit into the cliques of Jews in Philadelphia mostly due to her father’s profession as a pawnbroker, which was looked down upon. When letters from distant family in Europe began arriving at her home, begging Maxine’s parents to help them emigrate, she began having nightmares about being captured by the Nazis. She developed feelings of guilt for having been born safely in America, because despite this she and her family were still discriminated against by others including wealthier Jewish families.

Kumin’s  soon-to-be-husband Victor was part of the top-secret military team working on the atomic bomb in Los Alamos, New Mexico. She shares many excerpts of the any hundreds of letters she exchanged with Victor when she was finishing at Radcliffe College and he, a new Harvard alum, was stationed in New Mexico. It was several years before Maxine finally graduated from Radcliffe and Victor finished in New Mexico, and the day after her graduation she turned twenty-one and they got married, at which point she says “we never wrote to each other again.”

Her discontent with daily life as a housewife began a few years later when she was feeling trapped in the role of domesticity. There were  no creative writing classes or workshops or MFA programs for her to continue writing in a professional environment, which is something she really enjoyed doing in college and hoped to have been able to pursue. She managed to find work as a ghost writer, writing pieces that were published in the Wall Street Journal, New York Herald Tribune and the Christian Science Monitor. Here is the (not) funny part:

“Victor, as my husband, was required to provide a letter from his employer certifying that my poem was original. This is not as far-fetched as it sounds today. In the fifties, women, along with people of color, were still thought to be intellectually inferior, more appendages in the world of belles lettres.”

When her first book, a collection of poetry, was published in 1961, it was one of only eight books of poetry collections published by women in the U.S. that year. Over the years the subjects of her poetry were incredibly diverse, ranging everywhere between “the natural world” to commentaries on social issues like the Bosnian War, animal cruelty, the Iraq war, and the AIDS epidemic.

“Today we have literally thousands of poets raising their anguished voices, not just in English, but in Arabic, Russian, Farsi, and a hundred other tongues. Are our poems succinct, studding, intensely moving? Of course we hope they are. Do they change the course of elections, undo death penalties, pardon political prisoners, expose fraud and corruption? These are rhetorical questions, but the poetry of witness at least provides a living archive, exposing the folded lies.”

Maxine and Victor bought a farmhouse in New Hampshire that was built in the 1800s and spent many weekends renovating the land and the house itself. This, which is the entire fourth chapter of the book, in which Maxine describes her search with Victor to find the perfect house among the many rolling hills in New Hampshire, is my favorite because it sounds like an absolute dream. The private swimming hole, vegetable garden, the horses and apple trees and in the winter, the silent snows that would blanket their little plot of land. All of which is very appealing to this city dweller 🙂

In fact her fourth collection of poems was inspired by their farm, called Up Country was the one which was awarded the Pulitzer Prize, and yet her time on the farm was exactly what she needed to separate herself from the real world, or at least the aspects of it which she didn’t want to be a part of:

“Winning the Pulitzer Prize for my fourth book was wonderful, but it filled me with anxiety. Being in the limelight terrified me. It was well known that fame often led to writer’s block. At that moment I dreaded the paralysis I was certain awaited me. Would I ever write again? As soon as I could, I fled to the farm. There I took…advice to cultivate my garden and started the season’s first crop of frost-hardy chard, lettuce, and spinach. I dug compost into the soil, raked, gather bucketsful of stones, raked again. Once I had dirt packed under my fingernails I recovered my equilibrium. The poems inched back in their own time.”

Even if you know nothing about Maxine Kumin’s work (thought I do recommend reading some of her poetry if you can) if you are a reader who is interested in the lives of writers, you will surely enjoy this book.