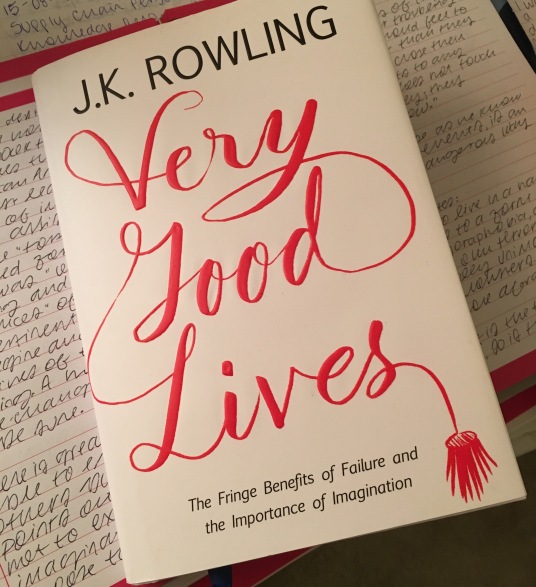 This inspiring little book by J.K. Rowling is actually a copy of the commencement speech she gave at the Harvard 2008 graduation ceremony. While December is full of holiday fun and anticipation, it can also sometimes bring mixed emotions as we approach the end of the year and find ourselves reviewing the last eleven months and wondering what the next year will hold. Sometimes we contemplate the bad more than the good, and worry about what other bad things could happen in the next year. It is inevitable to do so when we anticipate change, and so for anyone needing a pick-me-up, here are some inspiring pieces of advice from Very Good Lives which brought me a little peace of mind, and might do the same for you:

“There is an expiration date on blaming your parents for steering you in the wrong direction; the moment you are old enough to take the wheel, the responsibility lies with you.”

“Ultimately we all have to decide for ourselves what constitutes failure, but the world is quite eager to give you a set of criteria, if you let it. So I think it is fair to say that  by any conventional measure, a mere seven years after my graduation day, I had failed on an epic scale. An exceptionally short-lived marriage had imploded, and I was jobless, a lone parent, and as poor as it is possible to be in modern Britain without being homeless. The fears that my parents had had for me, and that I had had for myself had both come to pass, and by every usual standard I was the biggest failure I knew.”

“You might never fail on the scale that I did, but some failure in live is inevitable. it is impossible to live without failing at something, unless you live so cautiously that you might as well not have lived at all – in which case, you fail by default.”

In her early years Rowling spent time working at the African Research Department of Amnesty International’s headquarters in London. It was here, she says, that she first learned the importance of imagination. Her job was helping to assist those who were “tortured or imprisoned for their beliefs” which was “one of the most humbling and inspiring experiences” of her life, and it was pertinent that she have the ability to empathize, to imagine, the lives of those she was helping. A hugely impressionable and unforgettable experience to be sure.

We know that there is great power in being able to empathize with others but as Rowling points out: “Many prefer not to exercise their imaginations at all. They choose to remain comfortably within the bounds of their own experience, never troubling to wonder how it would feel to have been born other than they are…they can close their minds and hearts to any suffering that does not touch them personally; they refuse to know.”

And we know from current events how dangerous this is.

“Choosing to live in a narrow space leads to a form of mental agoraphobia, and that brings its own terrors. I think the willfully unimaginative see more monsters. They are often more afraid.”

The wisdom in this book is plentiful but here of my favorite and perhaps most memorable:

“We do not need magic to transform our world; we carry all the power we need inside ourselves already; we have the power to imagine better.”

But of course, would you really expect any less than buckets of wisdom, inspiration, hope and encouragement from Rowling? 😉

One thought on “Book Review: Very Good Lives: The Benefits of Failure and the Importance of Imagination”