Ray Bradbury is a staple of American literature and I dare you to tell me you’ve never heard or read his work. Think back to your early middle or high school days where you may have read A Sound of Thunder, ring any bells?

I’ve yet to find a Bradbury story that’s affected me as much as A Sound of Thunder and it is one of those rare short stories that I go back and read every few years. But I found these two stories, both from the book The Illustrated Man to be equally exceptional to A Sound of Thunder and worthy of being included in my favorites club. 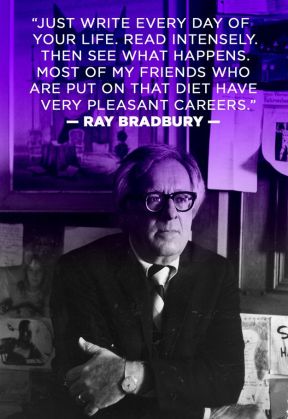 Ray Bradbury’s “The City” tells of a city (shocker) on a far off planet that has been ominously lying in wait for twenty thousand years. A group of explorers from Earth (good ‘ole Earth) who have just arrived via a sky rocket (typical) enter the city with trepidation and uncertainty. It looks like any other city (think Chicago or Los Angeles) but it appears to be vacant and lifeless. One man from the explorer group, Smith, firmly believes that something is amiss in the city. He’s got that feeling and continually tries to convince the others including his captain that they should return to the rocket asap. All is too quiet, too clean, and too mysterious. As they pass rows of buildings Smith notices that something is beginning to shift intermittently in his peripheral vision yet when he mentions it to the others he realizes he’s the only one to have noticed. Little do they know that the city is in fact alive, and it is slowly taking into account every physical and biological measure of the men as they walk further and further in. The city wants to know whether these are in fact the men it has been waiting for.

Upon confirming that they are the ones the city is no longer dormant but fully alive and bursting forth into action, and it abducts the captain as its first victim. His abdominal organs are ripped out without warning and he is fitted with machinery that now owns his body. The men quickly learn that they are the Earthmen that the city has been waiting for, and that its plans for revenge are to finally commence: humans explorers just like them arrived once before twenty thousand years ago and destroyed the city and the planet. But now that they have come back, the city has its chance for vengeance. By killing each soldier and systematically turning them into automatons, the city will execute its plan to gain revenge on all of the humans. Each of the explorers, dead but now remotely controlled by the mechanical mastermind of the city, are lead back to the sky rocket instructed to return straight to Earth so that they can destroy their own planet for the ultimate retaliation.

Twenty thousand year grudge. Will it be worth it? 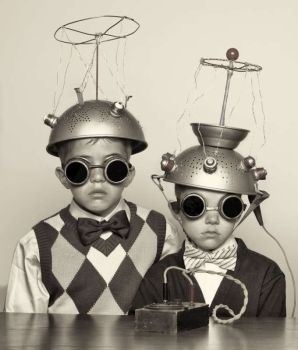 “Zero Hour” tells of seven-year-old Mink and her fascination with a game she plays with her friends called Invasion. If you have ever babysat someone else’s small child aged five through nine, you know that kids this age can be simultaneously cute/adorable and creepy/terrifying. Especially when they have toy weapons that they aim at you without warning and then laugh in your face when you get startled. That’s just the way it is when they aren’t your kid and you have no idea what to expect from them.

Mink and her friends, completely oblivious of their parents and any neighborhood children older than the age of ten (something to do with puberty no doubt), stampede outdoors with knives, forks, can openers, and other household items to play Invasion. Whatever that means, since we never really find out. Mink babbles to her mother, Mrs. Morris, about the new game to which Mrs. Morris casually disregards and attributes to her daughter’s new phase that will soon pass like all the others. Ah, Mrs. Morris, it’s never just a phase. She learns from a phone call with her friend Helen, who lives in the next city, that her son has also become engrossed in the game Invasion, and Mrs. Morris becomes vaguely suspicious, exactly how popular has this game gotten? (Think, Pokemon epidemic status).Though Mrs. Morris tries to encourage Mink to take a break from this new game Mink continuously tells her mother that she must keep working before Zero Hour approaches. She keeps telling her that she will make sure she won’t be hurt too much, which confuses Mrs. Morris even more.

The following day Mr. Morris arrives home at the exact time Zero Hour has finally commenced and Mrs. Morris, unfortunately much too late, realizes what it means: all of the children who have been playing the game are now coming after their parents. (Think, attack mode/guerilla warfare). Mrs. Morris convinces her husband to go into the attic with her, locking the door and throwing away the key, urging him to keep quiet as they hear the sounds of dozens of children racing upstairs after them. The deadly implications of Zero Hour suddenly dawn upon the parents and Mink and her friends bust down the door and stare at them with hungry wild eyes.

Scared of your kids yet?

Images are, as always, via Pinterest. If you happen to know the original owner, let me know! I would be more than happy to add credits.

Both of these stories are enthralling and quite creepy. If I’ve learned anything from the amount of science fiction short stories and novels I’ve read so far it’s that science fiction isn’t just about outer space, aliens and advanced technology that does your homework for you. It’s as much about human psychology and emotions as it as all of those things, and the worst fears you never knew you had will most certainly be brought to life while reading them. Think about it: you probably weren’t as scared of clowns until you read It right? Once you get past the dorky stereotypes, science fiction is a genre like any other with the power to affect just as much, and usually when you least expect it.